The assumption, that on micro-scale, the mineral forms small hemispheres or cubes leads to the classical assumption that on macro-scale, the surface A of a mineral should depend like A=A(c)=c^(2/3) on the mineral amount c. This introduces a term in the model, which is not locally Lipschitz at c=0. This leads to non-uniquenss of solutions and to non-convergence of Newton’s method within numerical simulations. The classical way to deal with this difficulty is to force c>=epsilon for a prescribed epsilon>0, which is a modification of the original model. However, we propose to use a substitution c_neq := c^(1/3) instead which eliminates the non-Lipschitz term and leads to better convergence of Newton’s method.

2.2.: Application of our cpu-time saving ‚Reduction Scheme‚ (within our software Richy2D/3D)

to the MoMaS Benchmark on Reactive Transport
See the following publications (among others):

See here  for the description of the benchmark.
Figure: Chemistry: MoMaS Benchmark on multicomponent reactive transport. Geometry: our extension of the 2-D setting to 3-D: visualization of the tracer species; flow field computed with mixed finite elements. 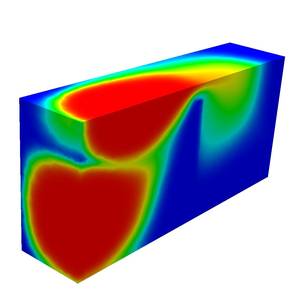 We consider a generic (simplified) set of chemical reactions that contains a principal mechanism which may take place in subsurface CO_2 storage sites. It consists of 3 mineral species, 3 sorption sites, 7 aqueous species, and 6 reactions, 3 of them at equilibrium. 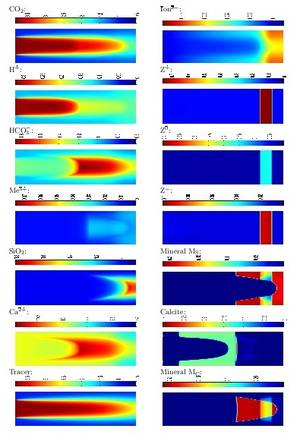 See the following publications (among others):